(Portland, OR) – State legislatures across the country are stepping up to protect public health from harmful chemicals in an effort to fill gaps in chemical protections due to inaction by the US EPA, according to an analysis of state policies by Safer States. The analysis found that at least 23 states will consider 112 policies to limit exposures to toxic chemicals, including bans on nonstick PFAS chemicals and toxic flame retardants. The analysis, including a searchable state toxics policy database, is available online at saferstates.com/bill-tracker/.

Despite an overhaul to the nation’s primary chemical safety law in 2016 that was intended to fix the broken chemical regulatory system, the U.S. Environmental Protection Agency (EPA) has largely failed to take meaningful action to restrict toxic chemicals.  For example, in the last year the EPA rewrote a rule to make it more difficult to track the health impacts of PFOA, a chemical linked to cancer and other health effects, despite its presence in the drinking water of over 6 million Americans. The agency has also shelved plans to regulate a deadly chemical in some paint strippers despite increasing reports of fatalities associated with the use of the chemical.

“States are doing what the federal government is not: protecting the health of families by pursuing stronger protections against harmful chemicals,” said Gretchen Salter, Interim Director of Safer States. “As scientists and scientific authorities reinforce the importance of strong protective chemical policy, states are poised to continue their tradition of leadership.”

“States must deal with the real world consequences of chemical pollution. From undrinkable water to contaminated residents to huge costs of clean up, we don’t want to be left holding the bag. Preventing these problems is the best solution,” said Washington State Representative Joe Fitzgibbons (D-Burien), Chair of the state’s House Environment Committee.

A recent study by Harvard University showed that costs associated with environmental chemical exposures worldwide may exceed 10% of the global gross domestic product. “Chemicals that cause cancer and other diseases are costing us dearly, burdening our health care system and sending families into turmoil—much of which could be prevented with common sense reforms to chemical policies,” continued Ms. Salter. “States are stepping up to make sure that their residents, particularly those in low-income communities often over-burdened by pollution, no longer have to pay the price for chemical contamination.”

According to Safer State’s analysis, states will consider the following policies in 2018:

Since 2000, more than 35 states have passed 173 policies that establish state chemicals programs, identify, limit or ban the use of harmful chemicals in products including baby bottles, furniture, electronics, toys, cosmetics and cleaning products.

The complete analysis is available online at saferstates.org/bill-tracker/.

At least 23 states will consider at least 112 policies to limit exposures to toxic chemicals. 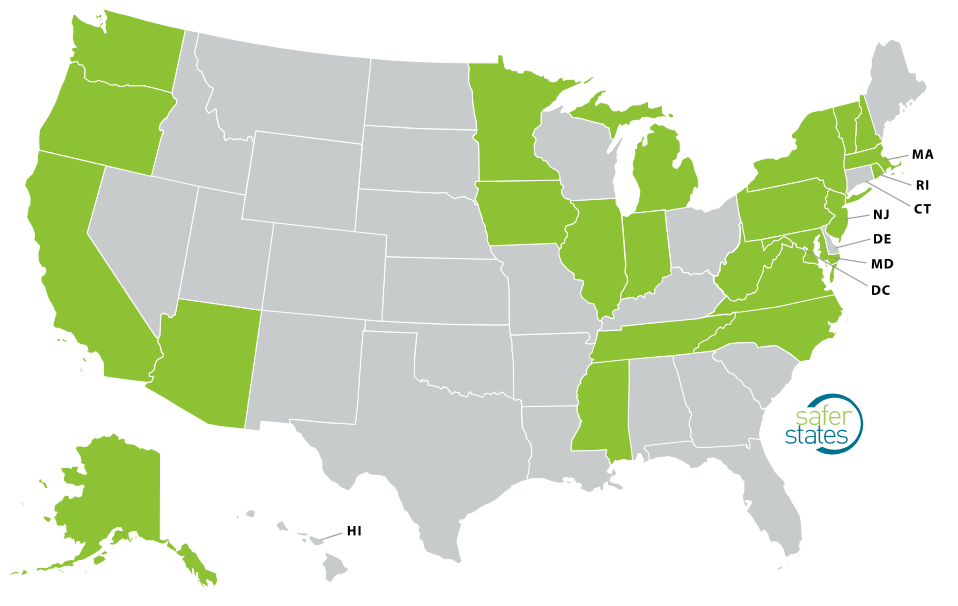