There’s good news on the cover of Sunday's Chicago Tribune on January 25, 2015. A health hazard hidden in most of our homes may be on its way out.

Here’s the up-shot: There is no practical reason to use toxic flame retardant chemicals in furniture any more. A 2012 change in California law acknowledged that it’s possible to meet flame retardant safety standards without adding dangerous chemicals to upholstery.

After decades, a number of leading retailers and manufacturers are ending the practice of adding many pounds of these chemicals to polyurethane foam.   Savvy shoppers can now find safer furniture if they that know what to ask and how to read the furniture tag.

That’s a great success for all the champions who’ve raised concerns about the chemicals: state lawmakers and regulators, consumers advocates in the Mind the Store campaign, and forward-thinking major purchasers like Kaiser Permanente.

The ripple effects go far beyond our living rooms. From manufacture through disposal, these flame retardant chemicals linked to cancer, developmental problems and impaired fertility end up in our air, water, homes and workplaces, creating health hazards for our firefighters, manufacturers, and our families.

According to Bob Luedeka, executive director of the Polyurethane Foam Association, losing the major purchasing power of Ashley Furniture would be enough to end flame retardant chemicals in furniture once and for all. Safer Chemicals, Healthy Families and Safer States are asking Ashley Furniture to commit to a clear public timeline. You can take action now to thank Ashley Furniture, and ask them for a clear timeline.

McCreary Modern, a major furniture maker, tells the Chicago Tribune: “We want our products to be as clean and safe as possible. It's just the right thing to do."

And if it's the right thing to do for “clean and safe” furniture, shouldn’t children’s products and other household products also be free of these same hazardous chemicals? A number of states across the nation will propose legislation to remove toxic flame retardants from furniture and also children’s products in 2015.

Retailers who are eliminating flame retardant chemicals from their products:  Crate and Barrel, Room & Board, and Williams-Sonoma (Pottery Barn, West Elm).

Look for a furniture tag that reads: “the upholstery materials in this product contain NO added flame retardant chemicals.” 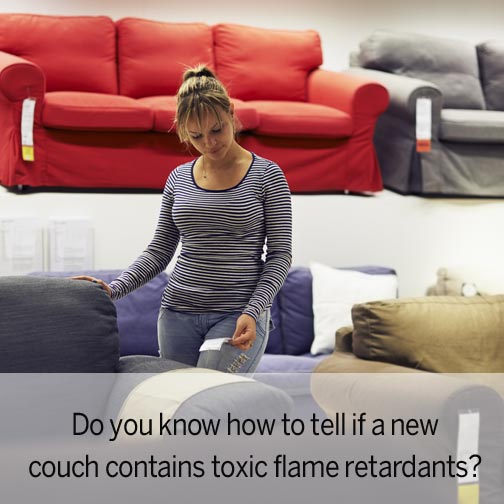