“PFAS Summit” Must be More than Talk

(Washington, DC) - A national coalition of state environmental health advocates is calling on state and federal officials to take swift action to protect Americans’ health from highly fluorinated chemicals or PFASs. The coalition of Safer States delivered a letter signed by 41 organizations from 13 states to state and federal officials meeting in Washington, DC this week to discuss the emerging health crisis of PFAS-contaminated drinking water that now affects over 16 million people in 33 states.

Last week, it was reported that the US Environmental Protection Agency is preventing the release of a government study by the Agency for Toxic Substances and Disease Registry (ATSDR) that found the USEPA’s recommended health advisory limit of 70 part per trillion for PFAS chemicals to be up to six times too high. The EPA has for decades delayed action on these chemicals, refusing to strictly regulate these dangerous compounds. As a result state and local governments have been taking the lead in regulating and assessing the chemicals.

“EPA’s outrageous action to suppress a government study about the health hazards of PFAS shows that communities across the country can’t count on this EPA to address this public health crisis in a meaningful way,” said Liz Hitchcock, Acting Director of Safer Chemicals Healthy Families.  “States must continue to lead by cleaning up current contamination, establishing drinking water standards, and preventing future pollution.  EPA should follow their lead and provide the resources they need to protect their residents.”

PFAS chemicals are industrial chemicals that are showing up in drinking water, people, and the environment across the country. Used in stain-resistant and waterproof coatings in consumer products and food packaging as well as in some firefighting foams, these chemicals are linked to cancer, liver toxicity, and other negative health impacts. PFASs are extremely persistent and can stay in the human body for as long as 8 years.

Federal inaction has come at a huge cost to state taxpayers who must pay for testing and monitoring, delivering clean water to communities with contaminated water, cleaning up contaminated sites, and covering health care costs and other economic losses.

"States are facing huge costs as they deal with these chemicals. Taxpayers can't afford to have these chemicals continue to flow in our communities and pollute drinking water, people, and the environment. States must act now by banning the use of PFAS chemicals and putting in place other safeguards to protect their residents and prevent future contamination. We call on EPA to support these efforts," said Laurie Valeriano, Executive Director of Toxic-Free Future.

A copy of the letter can be found here. 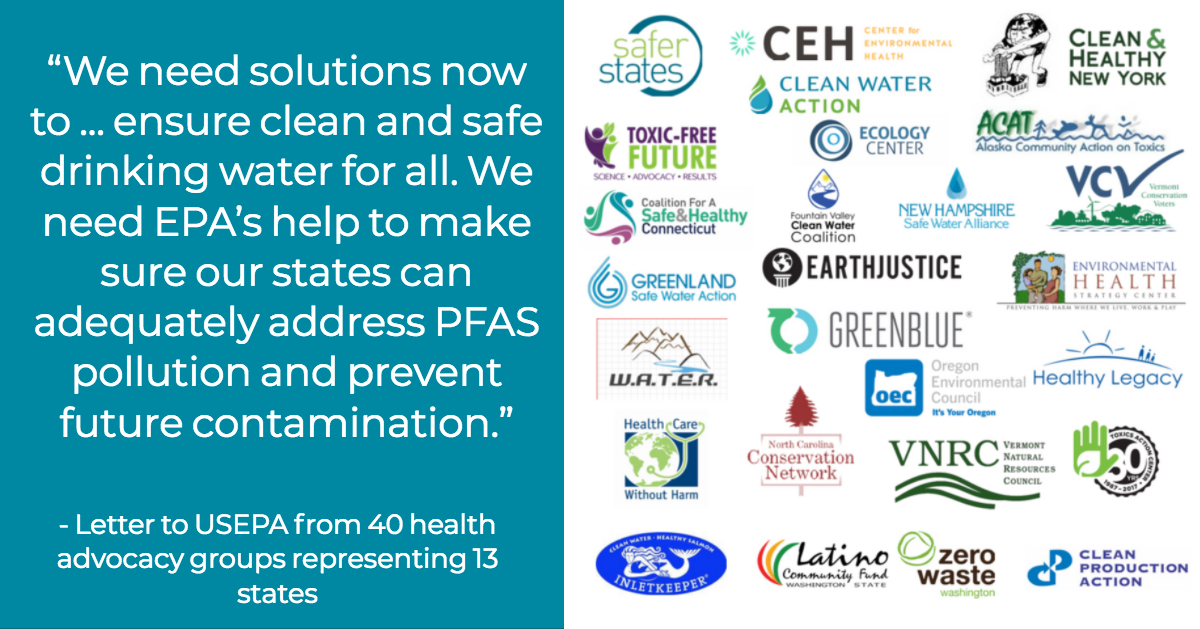