Click through the web site belonging to the Toy Industry Association (TIA) and you'll read about dedication to providing Americans with creative and fun toys. And really, what's more fun than toys? But behind TIA's seemingly positive face lies a more nefarious goal: laser-focused dedication to the bottom line of the companies it represents, at the cost of the health of children. We have heard from organizations throughout the country who say that TIA lobbyists show up at state hearings, opposing rules that would give the public a true insight into the chemicals that are in toys.

Much like the American Chemistry Council (ACC), the TIA wields hundreds of thousands dollars in some states trying to defeat bills and policies which would protect the public from toxic chemicals like bisphenol-a (BPA), formaldehyde, cadmium and phthalates in our children's most prized possessions: toys. Children sleep with toys, put them in their mouths and even put them in their food. And sometimes those toys contain chemicals that can negatively affect children's cognitive function and development, skin and respiratory systems, and can increase the risk of cancer later in life.

Seven manufacturers reluctantly disclosed that the chemical BPA is present in 280 plastic toys, in the first chemical use reports submitted under Maine's Kid Safe Products Act, a chemical safety law bitterly opposed by the toy industry (pdf). BPA disrupts hormones in the body, harms brain development and reproductive health and may contribute to obesity and diabetes. Because of growing concern about threats to healthy childhood development, BPA has been removed from virtually all baby bottles and formula can linings. Why then is it OK that BPA is present in the toys that the children pick up once they put down their baby bottles?

- Medium to high levels of chemicals of concern in one in three toys tested. The chemicals include arsenic, flame retardants and phthalates (ingredients considered toxic that are used in plasticizers). All of these chemicals can be detrimental if they get into the systems of children. Toxic flame retardants have been associated with thyroid issues leading to retarded brain development, lower IQ in children, and lowered fertility in women and men.

- High levels of toxic chemicals in low-cost jewelry including lead, cadmium, nickel and chromium. These chemicals are persistent, bioaccumulative toxins which build up in your system and are not easily flushed. Once they are present in the bodies of children they can cause irreversible problems with the developmental and nervous system. Low-cost jewelry is available for adults and children alike, but children often put the jewelry in their mouths which speeds up transmission of the toxic ingredients.

Healthy Stuff offers an app that gives the public information about the toys and other products they've tested. This research is done at non-profit expense because the Ecology Center sees it as important to inform the public about the ingredients in these products. "There is simply no place for toxic chemicals in children's toys," said Ecology Center's Jeff Gearhart, who leads the research. "Our hope is that by empowering consumers with this information, manufacturers and lawmakers will feel the pressure to start phasing out the most harmful substances immediately, and to change the nation's laws to protect children from highly toxic chemicals."

But shouldn't it be incumbent on the manufacturers to inform the public of the ingredients in toys and other products and to not put toxic chemicals in the toys in the first place?

Organizations that we partner with think so, and that is why they are working hard around the country to pass laws and policies that will restrict the use of the worst-of-the-worst chemicals, encourage the substitution of safer alternatives, and create databases which inform parents when toxic chemicals are used in products.

"If the Toy Industry focused on ensuring all TIA members were making their products without toxic chemicals, then none of them would be affected by the legislation they oppose," says Bobbi Chase Wilding, Deputy Director for Clean and Healthy New York.

And there have been successes. For example, Hasbro reformulated their product line to eliminate all use of BPA in plastic toys in response to Maine's requirement to report BPA use in toys. But no progress on policies to phase out toxic chemicals has happened without the Toy Industry Association opposing these actions every step along the way.

Throughout the country, the toy industry has aggressively opposed every effort by states to restrict toxic chemicals in products. Next to the chemical industry, the toy lobby has been the most consistent and aggressive opponent of chemical safety requirements.

Consider these actions the Toy Industry Association has taken in the states in 2011 alone:

- The TIA reportedly took positions on 33 bills in the New York State Assembly. Many of the bills had no impact on toy makers and included laws regarding lighting, furniture and appliances.

- They aggressively lobbied in Maine in a failed campaign to gut the Kids Safe Products Act. The law was passed in 2008 by an overwhelmingly bipartisan margin, making it one of the strongest toxic chemical safety measures in the nation. The legislative attack by TIA and the chemical industry was rejected, and the Kids Safe Products Act was not only fine-tuned, but strengthened.

Later in the legislative session, the toy industry lobby tried to attach an industry exemption to another bill, but was rebuffed again. Then, during the rulemaking process to implement the changes to the law, the Toy Industry Association (along with the ACC) tried to carve out an exemption from reporting or restrictions on BPA in toys by claiming that the chemical was a "contaminant" (meaning that it occurs in the toys naturally, and is not added through their processes). The state agency rejected the toy industry bid to hide its use of BPA-containing plastics through such a loophole.

The TIA spent thousands upon thousands of dollars in Washington State lobbying against the Children's Safe Products Act Reporting Rule, which would require that manufacturers declare toxic chemicals that are present in toys. Their work against the rule included not wanting to report phthalates—toxic chemicals that reside in plastic toys and mimic hormones in the body, wreaking havoc in the development of small children. In another example of TIA's alliances with the rest of the chemical industry, the Washington State TIA lobbyist also represented Citizens for Fire Safety—the recently disbanded industry front group that worked for the chemical industry against toxic flame retardant bills.

The main message that the Toy Industry brings when they approach legislators: These regulations are going to be too costly, they're going to force us to stop selling toys in your state, and you should leave it up to us to perform our own internal safety assessments which will take into consideration your child's safety. To be clear: According to its own reports, the traditional Toy Industry is a $21.2 billion a year industry and it has held fairly steady during the most recent economic downturn.

The TIA's economic threats are proving to be unfounded. The toy industry has not pulled out of any state where laws against toxic chemicals have been enacted, and life seems to go on when chemicals are banned. The best example we have of this is Europe, where six worst-of-the-worst toxic chemicals were banned from toys several years ago, with no apparent negative impact to the EU. When discussing economic impact, we must also take into consideration the cost of unhealthiness to the economic bottom line. Several of the toxic chemicals we have mentioned are considered possible obesogens, for instance, and the economic cost of obesity is $270 billion per year in the United States alone.

In Washington State, the Toy Industry Association did not get their way. Just this month, manufacturers began having to report 66 toxic chemicals contained in toys to the state, and the database has been released to the public. This is the first time in history that such a database is being required, and it's seen as a huge victory against the Toy Industry Association and other industry groups.

"These chemicals are on the list because they are not good for kids' health. Manufacturers shouldn't want to be using these chemicals in the first place," explains Ivy Sager-Rosenthal of the Washington Toxics Coalition.

The work the states have done to require more reporting, and more chemical regulation within the toy industry is commendable, and we look forward to watching it continue through more and more states. It is critical that we continue to protect the health of the most vulnerable population that we have: our children. 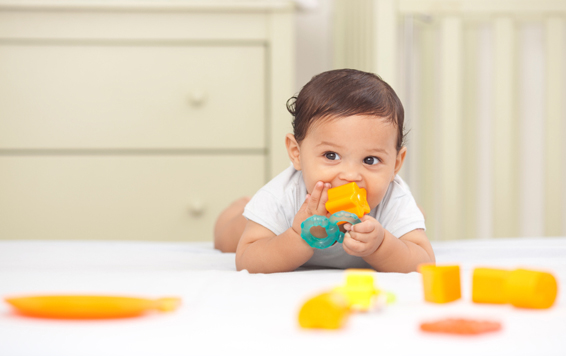 < Are We Extreme?
Flame Retardant Debates Heat Up in the States >